That’s our motto. Well, maybe not officially, but just ask any of our crew. Farming takes a lot of patience, a lot of early mornings and late nights, and a lot of faith. But it also gives us the chance to play with big machinery, to take tractor rides with our children and friends, and to feed our community.

The BDFC team includes some of the best folks around. Some have worked for us for more than twenty years, some have joined us just for the season. Regardless, being a part of the crew here is a great opportunity for farmers looking to work on a top-tier farm.

Ben owns and manages every aspect of BDFC’s crop production, from applications to planting and harvesting, from marketing to delivery. Ben has been farming as the Blue Diamond Farming Company since 1993. Prior to this, Ben attended Jesup High School and served as Jesup FFA President from 1978-1979. He then went on to Iowa State University, where he graduated in 1984 with a degree in Ag Business. He is a member of the Alpha Gamma Rho fraternity. Afterward, he earned his MBA from the University of Chicago in 1989. Between school and farming, he worked for Wells Fargo Bank and the United Bank of Switzerland in their Wall Street, Chicago, and Basel, Switzerland offices. In 1994, Ben was chosen for an Eisenhower Fellowship. It was then that he moved to Hungary to use his banking and farm management skills in aiding local officials in adjusting to free trade. In 2001, Ben won the Farm Journal Top Producer of the Year award. Ben continues to run BDFC today using innovative and cutting-edge technology and management practices.

Lisa and Ben first met when they were at Jesup High School, and they’ve been together ever since. Lisa attended Iowa State University and graduated in 1985 with a degree in Elementary Education/Special Education. She is a member of the Alpha Omicron Pi sorority. She was a teacher at Phenix Elementary in West Des Moines, Iowa from 1985 until 1989. Afterward, she taught at Wescott Elementary in Northbrook, Illinois from 1990 until 1993. After moving back to Jesup, Iowa, Lisa was elected to the Jesup Community School District Board of Directors. She has served on the school board since 1999 and is currently board president. She also helps out with the high school Future Farmers of America (FFA) program and received an Honorary Membership Award at the chapter’s 75th anniversary celebration in 2010. Additionally, Lisa is a member of the Allen Hospital Foundation Board. She and her family are active members of the Nazareth Evangelical Lutheran Church in Cedar Falls, Iowa. There, she volunteered for Vacation Bible School and was a Confirmation guide. On top of all of her responsibilities, Lisa raises four children, one oversized puppy, and several insufferable farm cats. Lisa and Ben celebrated their 30th wedding anniversary in 2019.

Lauren is Lisa and Ben’s oldest. She was a two-year President of the Jesup FFA, President of the Student Council, President of the National Honor Society, a Class Officer, and active in volleyball, theater, and speech. She graduated with honors from the University of Chicago in June 2015 and was awarded the highest undergraduate medal, the Howell Murray Alumni Association Award. There, she wrote her thesis in Sociology, took classes from the Booth Graduate School of Business, and, like her mother, joined Alpha Omicron Pi. In 2014, Lauren gave a TEDx talk about genetically modified plants. Over the years, she has worked in Jesup, IA; Cedar Falls, IA; St. Louis, MO; San Francisco, CA; New York City, NY; Chicago, IL; Milwaukee, WI; and Atlanta, GA. Currently, Lauren helps lead marketing efforts for Indigo Ag in Boston, MA. In the summer of 2020, Lauren married her high school sweetheart, Luke Gosse.

Hannah is the second-oldest. As a member of the Jesup Class of 2013, Hannah served as a class officer, was a four-year State track competitor, and president of the Jesup FFA. She graduated with the class of 2017 from Cornell University in Ithaca, New York, where she majored in Agricultural Sciences with a Business Concentration and a minor in Agribusiness Management. She is a member of the Alpha Phi Sorority, and in college participated in Agriculture Future of America, Cornell University Dairy Science Club, and was an Agricultural Sciences Ambassador. Hannah has worked at Monsanto, BankIowa, GROWMARK, and Channel Seeds, and managed a top Asgrow/DEKALB sales region as a District Sales Manager in southern Minnesota. In 2020, Hannah accepted a position with BASF as a business representative in sourthern Iowa, where she lives with her husband Mike, married 2022.

Hans is the third of the Riensche children. In the Class of 2017 at Jesup High School, he played trumpet in the school band and was an active member of the Jesup FFA chapter. Hans has also played at the state championship with the high school basketball team and has attended several basketball camps at Iowa State University under the mentorship of Coach Fred “The Mayor” Hoiberg. He has served as both class Treasurer and FFA Treasurer and is an avid soccer player. Hans studied Environmental Sustainability at the Northwestern University high school summer program in Chicago, IL and at Cornell University in Ithaca, NY. In 2018, Hans won the prestigious John Chrystal Award for his exceptional work as a Borlaug-Ruan intern based at the Chinese Academy of Agricultural Sciences in Beijing, China over the summer of 2017. Hans interned with BASF in North Carolina in 2018 and in Germany in 2019. This past May, Hans graduated as a member of the Iowa State University Class of 2021, where he was a member of Alpha Gamma Rho. He served as a senator for Iowa State’s College of Agriculture and Life Sciences. He is marrying his fiance Grace in 2023.

Faith is the youngest. She graduated valedictorian in the class of 2020 at Jesup High School. During her time in school, Faith served as President of the Jesup FFA chapter, was elected President of the National Honor Society, and competed in the 2019 All-State Speech competition. She was an avid athlete, playing varsity soccer with the Independence Mustangs and competing in state-level archery tournaments. In 2018, Faith attended the Women In S.T.E.M. class at Northwestern University in Chicago, IL and went to the FFA Washington Leadership Conference in Washington D.C. Additionally, she was involved in the World Food Prize Global Youth Institute. During the summer of 2019, Faith held an internship at Indigo Ag in Boston, MA. There, her work was focused on carbon sequestration through the Terraton Challenge. Faith earned her private pilot’s license in 2021 and is a member of the the Stanford University class of 2025. 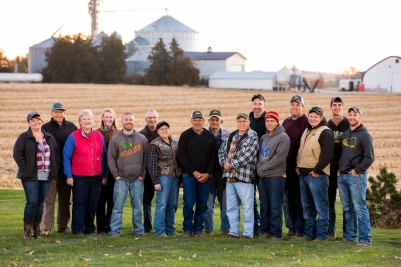 In addition to the Riensche family, there is a great group who help the Blue Diamond Farming Company to run every day. From driving grain carts, to fixing broken cultivator shanks, to putting the new crop in the ground, this team can do it all. The crew at BDFC loves to play with the latest and most innovative technology, work at an award-winning family farming operation, and be treated to spontaneous company outings (such as baseball games, farm shows, and team meals).

Early every morning, Monday through Friday (and sometimes Saturday), the crew arrives at the farm. Employees clock in, get a to-do list from Ben, and begin the day. As farming is largely a team-oriented occupation, our team get to know each other pretty well. Regulars at the farm include Andy Covington and Kendall Kane, both of whom have worked for BDFC for over 20 years.

Of course, behind BDFC’s outstanding group of employees are their spouses and children. These wonderful people are the ones who understand why the crew won’t always be home for dinner at 6pm during planting and harvest and why eight-hour days can sometimes morph into ten- or twelve-hour days. Working in the agricultural industry takes a lot of patience and passion for your occupation, and no one knows that better than the families of our employees.

At BDFC, our employees and their families are respected. From your first day on the job, you’ll be expected to learn, contribute, and expand your skills to meet the demands of a modern agricultural world. We believe there is nothing nobler than growing the food necessary to feed the world. As such, we strive to take care of our business, our land, our community, and our team.