Even in a recession, people need to eat. And right now that’s a saving grace for chemical companies with agricultural businesses.

Slumping consumer confidence has led to fewer purchases of products made from traditional chemicals, like paints or plastics. But shoppers are still buying food.

There’s also been a renewed interest in locally grown produce and home gardens.

That’s kept the chemical industry’s agricultural units busy engineering seeds that help farmers protect what they grow, and grow more of it. 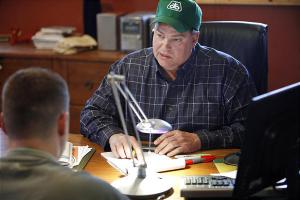 Farmer Ben Riensche, right, talks with Pioneer account manager Brandon Moe, left, on his farm near Jesup, Iowa. Even in a recession, people need to eat. And right now that’s a saving grace for chemical companies with agricultural businesses.

“There’s an increasing demand for food, and relatively few new acres that can come into production,” said Jim Borel, who oversees DuPont’s agricultural business. That conundrum, he said, “screams out for science and technology solutions.”

About 320 million acres of farmland were planted in the United States in 2007, or 8 percent of total land area, according to the Department of Agriculture. The number is roughly in line with figures from 50 years ago, but the nation’s population has jumped about 74 percent since then, sharply boosting food demand.

Globally, only about 36 percent of suitable crop land is farmed. That’s unlikely to increase much in coming years due to lack of water and other resources in some regions, causing an even greater reliance on higher-yielding seeds, according to the United Nations Food and Agriculture Organization.

It’s those seeds, and related products like fertilizer, that have been a bright spot amid an otherwise gloomy financial storm for chemical makers. 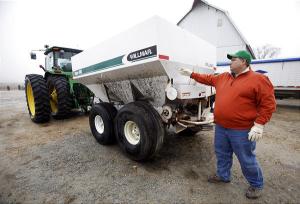 Seeds, and related products like fertilizer, that have been a bright spot amid an otherwise gloomy financial storm for chemical makers.

And BASF, the world’s largest chemical company, saw sales at its agricultural unit jump 9 percent to 3.4 billion euros ($4.49 billion) even as its companywide revenue fell 3 percent and it posted a loss. Most of the unit’s sales come from Europe, but it has a large North American presence.

The seed business caught the chemical industry’s eye in the 1990s, leading Dow Chemical and DuPont to form their own agricultural units through acquisitions.

Monsanto Co. went so far as to leave the chemical business almost entirely and transform itself into a giant seed maker that has vast parternships within its former industry, including one with BASF.

While efficient products endear chemical companies to their customers, outreach helps, too. DuPont’s Pioneer unit actually hired workers in 2008 — a contrast to economywide layoffs — and employs a traveling sales staff of more than 800.

That personal attention matters to farmers like Ben Riensche, who runs a 10,000-acre farm in Jesup, Iowa. A Pioneer representative helps him track production, soil quality and water retention through satellite maps and other tools.

In some parts of his field, Riensche uses genetically modified seeds that produce more ears of corn than traditional varieties. In other places, he’ll use seeds that resist insects, drought and herbicides, allowing him to use cheaper chemicals to kill weeds.

The technologies in these seeds are important. If a harvest is 50 bushels short per acre — one bushel is the equivalent of about 1.25 cubic feet — Riensche said he loses out on $150 to $200 an acre.

For him, the chemical industry’s agricultural units have one job: “Don’t let me fail on my land.”