You might not think Don Cantrell, Ben Riensche, Nate Riggers and Tim Richter have much in common. They farm different crops in different communities — as far as 1,500 miles from each other.

Yet, years ago the four got together and realized they had one thing in common: the need to upgrade equipment and lower fixed costs.

That’s when the germ of what seemed an outlandish idea started to become a reality: Why not take advantage of different crop lineups and growing seasons by sharing harvesting equipment?

Riggers owns three combines through separate limited company agreements between himself and Cantrell in Merna, Neb.; Richter in Lime Springs, Iowa; and Riensche in Jesup, Iowa. Once he finishes harvesting malt barley, wheat, canola and turfgrass seed from August through mid-September at his farm in Nezperce, Idaho, he ships each machine off for the grain harvests in Nebraska and Iowa.

The business arrangements allow all four farmers to lower fixed costs compared to owning a machine for each farm. Each LLC trader for a new John Deere combine every year, so the producers enjoy up-to-date technology; each combine is insured and under warranty.

“I can’t remember the last time I haggled over a combine price, because Nate does it for me,” says Richter, who grows 7,000 acres of corn and soybeans. “This year we put 700 hours on the combine; in the past we’ve used as many as 800 hours, which is nearly three seasons of use compared to most farms.” 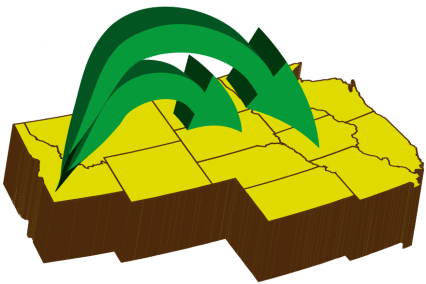 It started as a workshop idea Riggers had at the The Executive Program for Agricultural Producers, or TEPAP, meeting back in 1998, where he first me the other three. Cantrell saw Riggers again the next year, and the two decided to give it a try. Richter joined a year afterward, and Riensche a few years later.

The combines are trucked to Nebraska and Iowa for the corn and soybean harvest by an Idaho trucking firm, and trucked back to an Idaho Deere dealer after harvest to be traded for a new combine for the next year.

Flexibility and fallback plans are a must in this kind of arrangement. The first concern was what would happen should harvest seasons overlap. That did not happen until 2010, when Riggers’ harvest ran late. Cantrell was able to rent a combine from a neighbor to harvest a cornfield that had severe hail damage. “The combine was here from Idaho just in time to start on the rest of our harvest,” he adds.

Most years the Idaho wheat harvest ends about a month before the Nebraska or Iowa harvest begins. “This past year I got the combine Sept. 21, and I’ve gotten it as early as Sept. 10,” says Richter. “I grow mostly corn, so it’s not a big deal.”

It costs about $4,000 to ship a combine one way between Idaho and Iowa. They are shipped to local dealers where they are set up with wheels and final drives installed. “We put our own header on and GPS equipment in the cab, and it’s good to go,” says Richter.

Each party in the LLC puts half the down payment in as an initial capital contribution. They also split the costs for trucking, bank service charges and tax preparation. Each farmer pays their own maintenance and fuel costs during the time they use the machine.

Almost all repairs are under warranty and covered by John Deere. The insurance is also through Deere, so it is good in any state.

Getting a new combine each year—with all its advanced technology and efficiencies—is worth a lot to these growers. “We had a model 9770 for the 2011 season, and it has already been traded for a new 9770 for the 2012 season,” says Cantrell. “One payback for us is the combine comes to our farm in mint condition with a little over 200 hours on it, and all of the bugs are worked out of it.”

And the costs are significantly lower than conventional ownership.

“I look at some of my neighbors who have the same model combine I do, and I imagine what their payments are, spread over half the acres I have,” Richter says. “My costs may not be the cheapest, but I know they are very low.” On the flip side, this method means you don’t grow equity, notes Riensche. “We only pay the minimum of what it takes to own that new combine,” he says. “With combine prices going up, we’re not building equity this way. As an old-school farmer, I’d like to be building equity, and that doesn’t happen when you trade every year.”

There are also non-tangible benefits to these LLCs.

“For Nate and I, it’s not so much about the iron, it’s also about the human element,” says Riensche. “Since we have different harvest seasons, we send some of our employees to his place to help him in August, and he sends some of his guys here in September. It’s been a healthy experience for my employees to pick up some of Nate’s good habits.”

The best aspect has been the business relationships and friendships, add Riggers. “There might be cheaper ways to run a Midwest corn harvest or a Northwest wheat harvest, but all the side benefits of being involved with those three guys have been worth a lot. We’re like a peer advisory group for each other.”