After the wettest, coldest May on record in Iowa, crop producers there are struggling to get all their acres planted.

The northern third of Iowa continues to be saturated by rains, with some areas receiving more than 6 inches of rain from mid-May to early June.

Ben Riensche, who farms in northeastern Iowa near Jesup, has already lost 1,070 out of 7,000 corn acres to wet fields. “We just can’t get out into field,” he told DTN, noting that he has already applied for prevented planting on those acres. “(Prevented planting) is more attractive than switching to soybeans. The most profitable crop you can raise (in Iowa) is corn, the second is prevented-planting corn, the third is soybeans,” he said, only half-jokingly.

Stan Mehman, who farms around Nashua in northeast Iowa, has planted about 65% of intended corn acres. “We’ve switched to beans, but only have half of those planted,” by June 11. “We’ll probably end up with about 10% prevented plant acres,” said Mehman. “And it’s not because of flooding; it just has not stopped raining.” 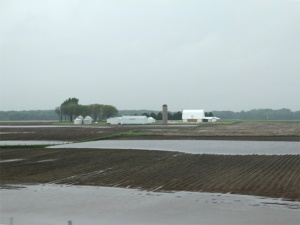 The northern third of Iowa continues to be saturated by rains, with some areas receiving more than 6 inches of rain from mid-May to early June. (DTN file photo by Elaine Shein)

A DTN subscriber who farms on the Minnesota/Iowa border reported only half the ground in Howard County has been touched so far. “Dairy farmers in southern Minnesota are liquidating herds. Their alfalfa experienced 80% to 100% winterkill because of the drought, and now they can’t get in to plant anything. This spring, the most time we had in the field at one time was three days. The rest was 12 hours here and there.”

The northern Iowa farmer switched 2,000 acres of which he had already applied anhydrous intended for corn to soybeans, and he is mudding those in. “I’m blowing on my beans with a fertilizer applicator and using a track-wheeled tractor pulling light tillage equipment at 12 miles per hour, perpendicular to tile lines to keep from sinking in the ground. We had a foot of snow on May 6 and spent all our growing degree units just melting the snow. And now it keeps raining,” he reported.

In north-central Iowa, Paul Anderson reported only 5% of the soybeans have been planted in his area around Dakota City. “About 70% of the corn got planted and most likely the rest won’t be planted,” said Anderson. “With the high cost of seed corn and the wet, a lot of farmers here are going ‘prevent planting.'” He said on June 11 that fields won’t be workable for seven to 10 days if no more rain falls during the week.

Riensche estimated that a prevented planting claim on his corn acres with a 175 actual production history (APH) will bring in a crop insurance check worth nearly $500 per acre. He calculated that after inputs, switching to soybeans would only bring in around $335 per acre. Late-planted corn wouldn’t fare much better, especially since fields probably won’t be dry enough to plant until June 15. He estimated that planting corn late with a lower guarantee would only bring in $350 per acre.

To add to the lure, Riensche noted that his production history won’t go down if he applies for prevented planting, whereas any corn put in now would almost certainly drop below his preferred 200 bushels per acre and lower his history.

Riensche still hasn’t planted one-third of his usual 4,000 acres of soybeans and worries that he might have to apply for prevented planting for up to 1,000 soybean acres. Even the slightly drier weather this week hasn’t allowed him back into his fields yet.

“We missed rains over the weekend, but our soils were so saturated that even though we’d gone five or six days since rain, they won’t hold our planters up,” he said. “If this weather system moves through on Wednesday and gets Iowa wet again, there’s going to be more prevented planted soybeans than prevented planted corn.”

Because conditions were better earlier in the season, farmers in the southern half of Iowa are facing more replanted corn issues and late-planted soybeans than filing for prevented planting claims.

Tom Vincent, who farms in Dallas County just west of Des Moines, is waiting on fields to dry before he can plant 200 acres of soybeans. But he doesn’t expect to file a prevented planting claim, even if the June 15 deadline for full crop insurance coverage comes and goes before he can plant.

“Prevent planting on beans isn’t very favorable at all, not near like it is for corn,” he told DTN. “Basically (it) gets you your cash rent back for the farm and maybe a little more.”

He expects to go with late-planted beans instead. “I’ll probably plant beans, if I have to, up to the first of July, just because the prevent planting is not that good.”

Unlike corn, Vincent figures late-planted beans also have a better chance to make a decent yield.

Shawn Adam from Batavia, in southeast Iowa, said he had to switch about 40 acres from intended corn to soybeans. He had 800 acres of replant corn and got most of that done. But Adam still has 2,000 acres of soybeans to plant. “We can get it done in three days, but we haven’t had three decent days to do it,” said Adam. He also farms for a cousin who will have 70 corn acres of prevented planting.

Sixty-five miles north, Terry Jones in Williamsburg, Iowa, finished his planting on May 18. “We’ll replant about 5% to 10% of both corn and soybeans due to flooding,” Jones reported.

In east-central Iowa, Dave Lubben of Monticello just finished planting soybeans on Tuesday. “On corn, we’re fine. But we had to mud in our soybeans. This is the poorest conditions we’ve ever put them in. We’re actually hoping it rains so the slot will close up,” said Lubben.

“We got all our intended corn acres planted,” said Bryce Veldhuizen of Eddyville, “but had to replant about 5%. We finished getting our soybeans in on May 24.”

Veldhuizen reports there are still unplanted acres in his area. He noted most farmers will use the end of June as a deadline to get soybeans planted before they’ll consider filing prevented planting claims.

It’s been a rough spring, “but if farming was easy, everyone would do it,” said Batavia farmer Adam from his sprayer as he slogged through another saturated corn field.